All individuals are united by sharing a single task: finding and doing their True Will. “Thou hast no right but to do thy will” (Liber AL, I:42). The sole right and duty of every individual is encapsulated in the Word of the Law of this Aeon: THELEMA.

Though everyone shares this same goal, each individual’s Path is unique. Thelema is universal insofar as it recognizes the same goal of all individuals (True Will) while acknowledging the unique nature of that goal for each person. Therefore, no real universal guidance can be given beyond “find your Will and do it.” As it is has been written, “There is no law beyond Do what thou wilt” (Liber AL, III:60).

Though there is no written guidance especially suited to us as unique individuals with unique Paths, there is still guidance to be found in the world: everyone’s own life provides the necessary language and symbols to guide one on one’s particular path to the accomplishment of one’s True Will… provided only that one is open and attentive enough to read the writing of this language. The intuition of the soul, the “Neshamah,” the promptings of the Holy Guardian Angel, the wisdom of the unconscious – regardless of what we choose to name it, it will speak to the mind in terms of the symbols in which the individual is immersed. This intuition simply requires the openness and attentiveness to these symbols, and lessons suited to one’s own particular Path will naturally emerge. For example, a chemist may use the language of atoms and chemical compounds, an actor the language of directing and acting, a mason the language of building tools, a musician the language of instruments and composing, and so on and so forth. Again, the question becomes: Are you open enough to the symbols and attentive enough to the messages they speak to you?

There are an infinite number of examples because of the limitless amount of symbolic languages of Nature and the endless amount of potential messages within each of these languages. Here are but a few examples to illustrate the point:

In this age, many of us do not have a single career or trade to which we devote ourselves exclusively for our whole lives. This only means we have the responsibility and the privilege to learn several “languages.” We may be a teacher, musician, magician, cook, and bicyclist simultaneously, and each of these has its own symbolic “language” and lessons… provided that one is open and attentive to them. 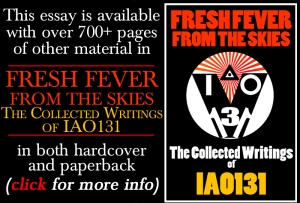 Now the question becomes, “What are your trades or passions?” To what do you devote your time and energy? If you are open and attentive to these trades or passions or skills or hobbies or whatever else, then you must ask “What lessons are they writing to me toward the end of accomplishing my True Will?” Since only you  can answer these questions for yourself, it’s now your responsibility to listen for the answers and to never stop listening.

Other articles in the series ‘The Will in Thelema’: