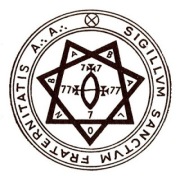 PART 5: MYSTICISM IN PRACTICE – Crossing the Abyss & The Hermit

The Ordeal: The Dark Night of the Soul – The Babe of the Abyss

One might think that such light, love, and bliss has no ordeal, but there is a distinct ordeal that awaits the Mystic at this second Stage of Illumination. As mentioned previously, the Mystic is united with the Object of her devotion in this Stage but still remains separate therefrom. If this Illumination is continued through the Mystic’s persistent devotion and meditation, the by-products of this Illumination – especially the sense of overwhelming joy, bliss, and rapture – eventually “settle down.” The initial Illumination is like an explosion and if one remains in it, the clouds slowly disperse and one can see clearly.

At a certain point, the Mystic may realize that – despite all the joys and encouragements that Illumination has brought – she is still not completely united with her Beloved. In other words, a sense of distinction, separateness, or duality still remains. The opposition between self and not-self, between ego and non-ego, has not been completely transcended. Upon achieving this insight, the Mystic must re-engage with the Art of meditation with renewed vigor in order to know the Absolute so intimately and completely that there is no duality that can remain. This brings the Mystic to the final “crisis” of the Path: the ordeal of Crossing of the Abyss.

The Nature of the Ordeal of Crossing the Abyss

• “Verily and Amen! I passed through the deep sea, and by the rivers of running water that abound therein, and I came unto the Land of No Desire.”
–Liber Cordis Cincti Serpente sub figura LXV, III:1

The crossing of the Abyss is a metaphor that essentially correlates to Saint John of the Cross’ term “the dark night of the soul.” A similar metaphor is given in Buddhism where one has “crossed the stream” to the other side, from samsara to nirvana. It is sometimes referred to by Christian mystics as “Dryness” or “aridity.” This term is adopted by Crowley when, for example, in De Lege Libellum he writes, “But this Dryness hath its virtue, in that thereby the Soul is purged of those things that impeach the Will: for when the drouth is altogether perfect, then is it certain that by no means can the Soul be satisfied, save by the Accomplishment of the Great Work. And this is in strong souls a stimulus to the Will. It is the Furnace of Thirst that burneth up all dross within us.”

In Thelemic terminology, in this process of “crossing,” one becomes a “Babe of the Abyss.” After the period of Illumination which is characterized – as mentioned previously – by joy and beauty, there is a corresponding darkness and blankness that occurs. This shift may go back and forth repeatedly but ultimately, if there is persistence, the Mystic comes to the Abyss, the dark night of their soul. This is characterized by various things:

“[He then] is stripped of all his attainments and of himself as well, even of his Holy Guardian Angel, and becomes a babe of the Abyss…”
–One Star in Sight

All this serves as a great purification, a great trial by fire, by which the Mystic is purged of attachments. It is the purgation that breaks apart the life of the Mystic, allowing a new stage of attainment to arise from its destruction. It is as if all those darkest corners of the self that were not purged in the initial purification find their way to expression in the Mystic, and this is because the whole individual – the microcosm of the Mystic – must be transmuted in this ordeal. As the Alchemists might say, there is no transmutation without fire. It “cures” the aspirant of being able to settle in any lesser satisfaction than the achievement of the final stage or grade, that of the Hermit.

• “Thou shalt mingle thy life with the universal life. Thou shalt keep not back one drop.”
–Liber Cheth vel Vallum Abiegni, line 3

• “…It is attained by the resolve of the Adeptus Exemptus to surrender all that he has and is for ever. It is an annihilation of all the bonds that compose the self or constitute the Cosmos, a resolution of all complexities into their elements…”
–One Star in Sight

In order to Cross the Abyss successfully, one must be purged of all that one has and all that one is. This is what, in Thelema, is metaphorically stated as the draining out of one’s blood into the Cup of Babalon. This is called the “Universal Life” insofar as one has drained out the blood of one’s “individual life,” the separate self, to be merged with the Universal Life. That is, one must release all attachment to everything that one possesses and to everything with which one identifies. This is why this phase is often called “annihilation,” “dissolution,” “cessation,” “self-naughting,” or “self-surrender.”

“[There] are the Black Brothers, that cry: I am I, they that deny Love, restricting it to their own Nature.”
–Liber Aleph, chapter 157

Failure to do this results in what Thelema calls a “Black Brother,” one who has attained this far yet refuses to give up the self in dissolution; the “Black Brother” is one who insists on retaining a sense of individuality or selfhood and does not drain the blood of their individual life into the Universal Life. However, if one succeeds in persisting to the end, one achieves the final stage.

3) The Hermit: The Arising of Nemo

The complete dissolution of the sense of separate self, of the ego, constitutes the attainment of the third grade, the Hermit. One is then, in Thelemic terminology, a “Magister Templi” or “Master of the Temple.” One is an arhat or buddha in Buddhist terminology, and one has achieved moksha, or “liberation,” in Hindu terminology; it is equivalent to Samadhi in the terms of Yoga, the total union of subject and object. Since one is stripped of one’s identity, any sense of self, then one also may be called “Nemo,” which is Latin for “no man” (see The Vision and the Voice, 13th Aethyr for more on this symbolism).

“The essential Attainment is the perfect annihilation of that personality which limits and oppresses his true self.”
–One Star in Sight

Aside from this attainment being characterized negatively by a total dissolution of the sense of self or ego, it is also characterized positively by awakening to the ultimate reality, the transcendence of duality, the complete union of subject and object, or the total identification with the Absolute. These are really two sides of the same coin, so to speak, and lead Mystics to make pronouncements such as “My eye and God’s eye are one eye” (Meister Eckhart) and “I am the Truth” (Mansur al-Hallaj).

Characteristics of this grade include:

The Task: Being cast out of the Abyss and tending to the Garden

“Those other parts of me that I had left for ever below the Abyss must serve as a vehicle for the energies which had been created by my act. My mind and body, deprived of the ego which they had hitherto obeyed, were now free to manifest according to their nature in the world, to devote themselves to aid mankind in its evolution.”
–Confessions, chapter 66

The complete dissolution, as previously said, leads to what one metaphorically may say is the birth of a New Man, the Master of the Temple or “Nemo.” The mind and body are not destroyed in this attainment, but they are purged of a sense of ego or self.

Although the trance may involve the obliteration of consciousness itself, there is consequent to this the inevitable re-formulation of awareness. This is symbolically called being “cast out from the Abyss.” The symbolism at work is that one has attained the Supernal Triangle of the Tree of Life and then one is “cast out” from it back into the lower Sephiroth of the Tree of Life. One then “re-occupies” one’s body and mind but free of ego.

“From the Abyss comes No Man forth, but a Star startles the Earth…”
–One Star in Sight

Thelema uses the symbolism of a “Star that is cast forth to give light to the Earth… [One] appears ‘as a morning star, or as an evening star, to give light to them that sit in darkness, and in the shadow of death.’ This is then the man himself, save that his separate individuality is no longer present; it is replaced by this single passion to rescue mankind.” (18th Aethyr).

In short, one becomes conscious once again, devoid of ego, to do one’s Work in the world, to accomplish one’s Will purified from the elements of separateness and the sense of self. In Thelema, the symbolism used is that of Nemo “tending his garden.” In the 13th Aetyhr it is stated, “Know thou that every man that is called NEMO hath a garden that he tendeth,” and Crowley comments on this by saying, “Every Magister Templi has a Work to do for the world.”

This Work is the Will of the individual, purified by the Mystic path of imbalance and egotism, invigorated by a reconnection to one’s deepest creative wellspring of power stemming from one’s own Godhead.