The Writings of V.

or the impetuous wanderings of a delusional mind

Birthpangs of V.
… and the issuing forth of the Wandering Lords

Who is this brother Victus and from whence does he come?

As one river may come from another, but all ultimately return to the Boundless Ocean, so is V. one river amongst infinite others. V.’s words are as the natural rushings of delight of the river. These words are at once the fiery echoes of one soul and also the reverberations of timeless archetypes, common to all existences.

Why should the inane babblings of such “V.” be worthy to be set in ink? What official, authorized decree demanded the distribution of such daring diatribes? None. V. is as an aggregate of experience, synthesizing and organizing and presenting a new sublime Arrangement for the World. Other such entities may use this or not – whatever they deem successful.

Is V. an illustrious adept or a miserable worm? He is both of these but ultimately neither as he knows such masks to be restrictive to his movements. We may merely admit “V. is” and it is his nature to speak.

Truly, let all the doubts pass and we shall hear the pronouncements of V.:

0. The Supreme Reality which is the Ultimate Nameless begets all, transforms all, destroys all, and transcends all.

1. This Nameless is a continuum – a unity which extends infinitely in all directions.

2. The Ultimate Nameless is the source of Existence, which is the complementary conflict of dualities.

3. The interaction between a Perceiver and that-which-is-Perceived gives rise to the appearance of the Universe and its infinite forms.

2. The Universe is a Fool’s Knot, resolved into its natural Equilibrium when this Two unites to One.

1. In this are all opposites resolved and Reality is seen to reside in that Joy beyond sorrow and happiness.

0. Though It abides in ecstasy, the Wheel continues to turn and the Universe proceeds in accordance with Its Will.

V. is as a burning star, whirling in delight through the expanse of Space. About him cluster the Lords of the Night of Time, the Wandering Lords that make the Harmony of the Spheres. Unto each, V. beseeches to learn their Lesson.

First, from the black depths of Eternity arises the terrible visage of Time – He is Saturn, devouring his children, and She is Kali, dancing triumphant on the corpse of Shiva. From This emanates the worlds: “I crush the adamantine fortresses and gobble the galaxies. Time is one condition, one rule, in the game of my Play: the World. That which exists will soon come to rest in the infinite cavern of my belly. Therefore be thou without attachment; for all waves crash upon the shore, but all eventually retract into the Sea. The musical vibrations of song grace our ears but eventually fade back into the omnipresent Silence. The Being who walks in conformity with my Law: he Goes as an eternally self-spinning Wheel, with the water droplets of Experience not clinging to the frame.”

Next, Jupiter comes in a round of regal overtones: “Thou art King of thine own universe,” he speaks. “Therefore rule all with the merciful hand of Love. All must be allowed to expand and move in its appointed, natural motion in thine Kingdom. Therefore, also, Love all Things – and this means come into Right Relation with them, while understanding and appreciating their part of the Whole.”

Mars bursts out in a flurry of swords and crushed yells: “The Will is paramount and all in its path must be utterly obliterated,” declareth he. “All that hinders the one-pointedness of the Will shall be abolished. The King must order his Kingdom as a doctor would treat an ailing body, or a gardener would treat a weed-ridden garden. Those factors restricting or prohibiting the full potential, the full expression of the Self must be eliminated.”

The Sun beams forth the Radiant Light of Truth and proclaims that, “All is one. Thy star is but one in the Continuum of the Ultimate Nameless. Therefore, harmonize thy universe into a Whole, for in Reality there is naught but this. Keep this knowledge of the Unity-of-all-things always in mind, even in times when thou art thou and I am I.”

The delicate leaves of luster illuminate the lavish likeness of Venus: “All is joy! All is beautiful!” pronounceth she. “Each thing is a perfect facet in the Omni-Gem of Unity. Bind all things into the radiance of this Gem and abide in the multitudinous Glory of its reflections.”

Mercury chimes in with a sweet voice of harmony: “Seek equilibrium in all things,” he advises, “and order the Mind to react elastically to all circumstances. Unite each thought to its opposite and realize the fatuity of all these thoughts, all speech, and all knowledge. Then shalt thou arise Master of both sides.”

The Moon gleams and glamorously gabs, “All is flux, the waxing and waning of my veil. Therefore, flow with the River and press ever onwards to conquer new ideas, worlds, and things.” And as soon as she had come, she flutters onward to ever pursue her course.

All these whirl around an invisible and unfathomable core, which issues, understands, and integrates all things. V. abides in this center and contemplates the proclamations of the Lords that Wander.

This is offered to replace the original content of the Second Outburst:

The whole in the part, and the cosmic body

Although V. is but part of the Whole, his Being bursts forth the infinitudes of the cosmos. To V., each thing is a symbol, all swirling together in one turbulent system. All things appear as a portion of a patchwork, woven together by the thread of Love.

V.’s heart overflows with the rapturous embrace of life – it brings forth galaxies and burns like the core of a sun. What terrible acquaintance can V. not bind together in his heart?

V.’s mouth chomps at the bit of life. The vibrations of thought find expression in his Words and his Songs. V. builds a mountain of discourse with Apollonian accuracy, and V. dissolves all in the Dionysian love-cry to Eternity. V. begets like the first fiery gestations of Time, and he devours with the greedy hunger of a fresh kill. What can satisfy his ravenous depths?

V.’s feet leap like a goat and shuffle like a monk. Each person marches to their own drummer, and V.’s is an enchanting rhythm. Endlessly undulating throughout the aeons, V. knows even his rest to be part of the Great Motion. Abiding in sublime simplicity, V. knows even his greatest strides to be but a facet in the cosmic Egg of Rest. What Motion may further fuel his Joy?

V.’s mind comprehends as the vast womb of space engulfs the milky span of stars. V. is both an architect and a builder – he is both a judge and an executioner. Beneath these chaotic complements lies the still pool of Suchness, where all thought is as a rippling contamination upon the empty fullness of its magnanimity. Though cloaked in stillness, the roots of omnipotence branches out in Its depths. From this, V. buds forth with the flowers of Ecstasy.

V. hath bloomed like a rose, expanding and opening unto the Light. Now, V. retracts himself like a turtle into his shell, so he may abide in the silent peace of Darkness.

V. dances and rejoices in the playgrounds of Eternity. The planets and star clusters are but parts of the game of cosmic motion.

But what of God in such a Universe?

God is as an extra piece in V.’s jigsaw puzzle. All interweaves into a harmonious Whole – what need is there for such a thought? Had V. not heard such a word, would not the trees still take root – would not the Sun’s illimitable exuberance still grace our world?

It is said that God is the greatest good. Show V. the greatest evil and he will kneel with equal respect. Can a one-sided coin be said to exist? V. can not acknowledge a God who’s omnipotence does not work with both the hands of mercy and of severity.

The Universe is a perfect and boundless system. How shall we limit the illimitable? For each mask we affix to the indefinable, we constrain the universal Word to a smaller expression. The universe? Nature? God? Each name contains a sliver of truth at the expense of the whole reality. V. sees no benefit in such labels – he would rather go his Way, and perform his acts of Love amidst the Ultimate Nameless.

Many look to the heavens for consolation. V. gazes up to the sky and knows himself to be part of the brotherhood of stars. He cleans his diamond-heart in the furnace of meditation, and the Child-Voice of Eternity bellows from within. The thread of divinity does not weave the boundary of unreachable heights – it weaves itself through our innermost places. All is a beautiful, though unruly, tapestry!

The turning of seasons, and
the clumsiness of grammar

In V.’s head lies winter wisdom, in his arms is the fragile touch of autumn, in his legs is the strong solace of summer, and in his heart is the eternal spring. V. takes his delight in all the seasons, binding the highest to the lowest into a pillar of Love.

What could possibly trouble V., who rides upon the ever-changing Wheel of ecstasy? His enemies lie in wait with subtle disguises. V. proclaims his most nefarious foe to be part of the very fabric of his own manifestation: grammar! For, that which utters “I” utters falsehood.

V. wishes to speak, but he knows there to be no subject nor object. Shall he keep his silence, lest his tongue confuses his heart? Nay. V. hath affixed himself in equilibrium between This and That, and he knows them in truth to be one. This double wand V. wields as he proclaims those many falsehoods that may only point towards Truth.

V. paints a landscape through the tricks of color to expresses that place of Beauty wherein he abides. As a smell digs up memories past, V.’s paintwork brings forth the rapture of all in the hearts of men. V. strikes the loud chord of Unity so all sympathetic souls may resonate with him.

Through such speech, V. finds Silence. 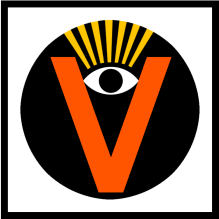 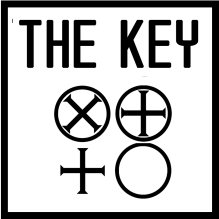 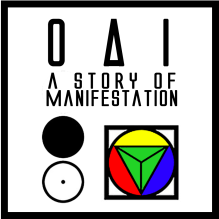 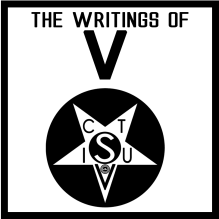